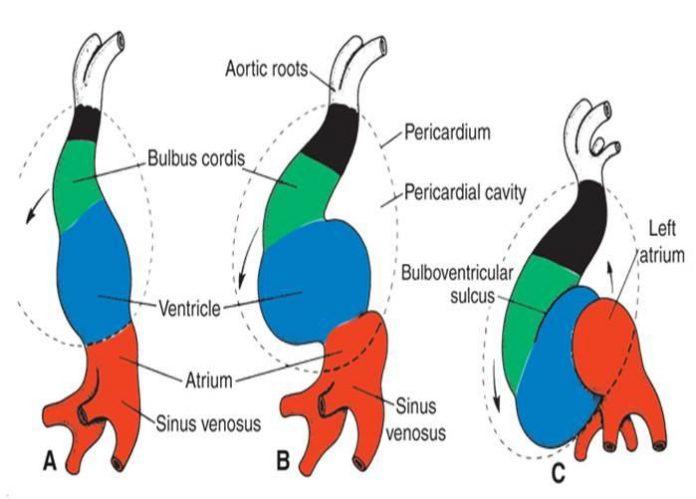 [box type=”info” align=”alignleft” class=”” width=”500px”]When looking down at this early embryo you can see multiple blood islands dispersed throughout the embryo. These will form the early blood vessels. At the most cranial end of the embryonic disc these blood islands are actually the primitive heart tube. From the side you can see one of the heart tubes and heart cavity developing in this position.[/box]

The disc-like embryo then undergoes a process of folding, in which both the cranial and lateral parts of the embryo fold ventrally (forwards). This brings the heart-forming region to a ventral (frontal) position. The following animation shows the development of the heart tubes and how embryonic folding brings them to fuse in the midline.

Segments of the Heart Tube

At this stage the tube already has minor constrictions within it, indicating sections of the heart tube that will form parts of the adult heart. The most caudal (tail end) segment of the heart tube is the sinus venosus which will later become the ends of the major veins carrying blood to the heart as well as parts of the atria. The next segments are the primitive atrium and primitive ventricle which will become the atria and ventricles of the adult heart. Cranial to these segments are the bulbus cordis, most of which will become the right ventricle, and the truncus arteriosus which forms the pulmonary and aortic trunks carrying blood away from the heart.

This tubular heart undergoes a process of looping during week four of development to form a shape that resembles that of the adult heart. It initially forms a C-shape (with the convex portion of the C situated on the right side of the embryo) and then an S-shape. Eventually the atria are brought backwards and upwards so that they lie cranially and behind the ventricles.

Septation of the Heart

The internal heart then undergoes significant changes in order to form the atria and ventricles of the adult heart. These can be summarised as follows:

All of the partitioning of the primitive heart occurs between the middle of the fourth week and the end of the fifth week. The following animation shows the processes involved in the division of the atrioventricular canal, atria and ventricles.

Some understanding of the vascular system of an embryo is useful in completely understanding cardiac development. In the primitive heart tube section it was stated that the blood islands dispersed throughout the embryo form the early blood vessels. The islands coalesce to form vessels and these expand and continue to develop, forming vascular networks. The vascular system can be thought of in terms of arteries and veins and the major embryonic vessels can be seen in the diagram on the right.

We saw in the fusion animation that the dorsal aortae develop at the same time as the early heart tubes. These connect to the heart tubes prior to fusion via the firstaortic arch arteries. Other arches develop, which go on to form the arteries of the head and neck. We also previously saw the way in which the aorta and pulmonary trunk form. The dorsal aorta gives off branches which supply blood to the rest of the embryo:

As the embryo progresses to a fetus the vasculature is still remarkably different to that of the adult, including the presence of three vascular shunts:

These shunts allow blood to bypass the lungs, liver and kidneys, whose functions are performed by the placenta while in utero.

The following diagram shows the movement of blood throughout the fetal circulation. The main flow of blood is as follows:

Blood that passes from the right atrium to the right ventricle travels: