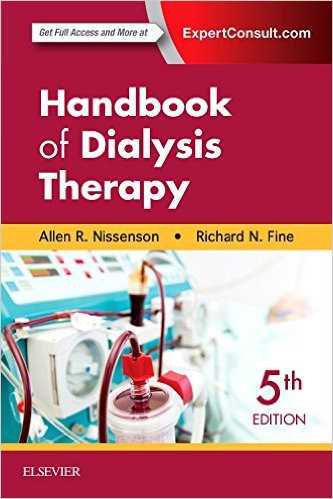 Providing practical, immediately useful guidelines that can be applied directly to patient care, Handbook of Dialysis Therapy is a must-have resource for all dialysis caregivers. This new edition has been updated with the latest cutting-edge technology, dialysis techniques, and complications related to various diseases for both pediatric and adult patients. In-depth yet concise, it explains complex dialysis concepts through abundant diagrams, photos, line drawings, and tables, while its readable hands-on approach allows for quick review of key information.

Dr. Richard E. Fine received his Bachelor’s and Ph.D degrees in Biochemistry from University of California at Berkeley and Brandeis University respectively. He then was a postdoctoral fellow in the laboratory of Francis Crick and Sydney Brenner at the Laboratory of Molecular Biology in Cambridge, U.K. During this period he and his colleague, Dennis Bray provided the first evidence for actin in growing neurons. Dr. Fine became an Assistant Professor of Physiology and Biochemistry at Boston University School of Medicine and demonstrated the existence of actin regulatory molecules, tropomyosin and troponin C in growing neurons, and he subsequently became interested in the role of clathrin coated vesicles in endocytic and exocytic processes in neurons and in other tissues. He also isolated and characterized vasopressin receptors, demonstrated for the first time that a large molecular, transferrin, can cross the blood brain barrier. His laboratory used an antisense oligonucleotide for the first time in vivo in the rabbit retina to demonstrate the critical role of kinesin in the transport of synaptic vesicles, neuropeptide containing vesicles and vesicles destined for the plasma membrane. In recent years Dr. Fine’s laboratory has focused on the role of the amyloid beta peptide in Alzheimer’s disease especially in brain capillary endothelium. Also he has recently focused on the role of a mutant protein VPS35, a component of the retromer in Parkinson’s and Alzheimer’s diseases. During his career he has received over $25,000,000 in grant funding, have served on both NIH and VA review panels and authored or co-authored over 100 research papers.